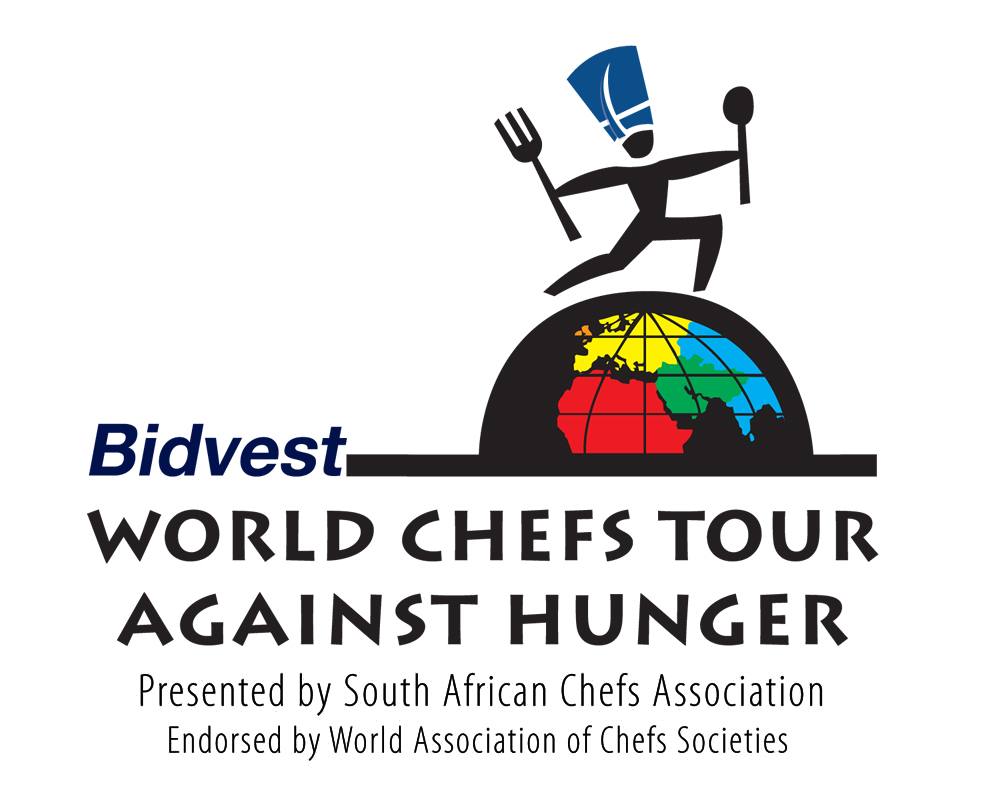 The Bidvest World Chefs Tour Against Hunger that took place in 2011 raised R 8 million towards the plight of starving children in South Africa.

The World Chefs Tour Against Hunger is now making sure that the right food is being purchased and distributed to the charities as well as creating events and initiatives to further the fight against hunger in our country.

Although the chefs have left our shores, the Tour’s fundraising initiatives will continue and companies can still make pledges to the fund. For more information contact World Chefs Tour Against Hunger Coordinator, Bridget Gunner on (011) 482 7250 or on wctah@saca.co.za.

With the support of over 200 international chefs, the initiative aimed to amass over R4-million and feed hundreds of thousands of starving South Africans.

Through the auspices of the South African Chefs’ Association (SA Chefs), and together with the World Association of Chefs’ Societies (WACS), the third fundraising tour was proudly supported by the Bidvest group.

As 250 chefs departed South Africa for their homes in 44 countries around the globe, they left behind a lasting legacy that will ensure that 450 children receive a meal every day for the next five years. Thanks to the generosity of sponsors, corporate South Africa and the public, R8 million was raised over the 10 days of the Bidvest World Chefs Tour Against Hunger, which went directly into providing 821 250 meals to needy children over a five year period.

The Tour, which began on 20 August 2011 and ended in a spectacular gala dinner in Johannesburg, saw chefs from as far afield as Thailand, the USA, Myanmar, South Tyrol, Russia, Nigeria and Saudi Arabia coming to South Africa to help fight the ravages of hunger.

This was the third time that World Chefs Tour Against Hunger has been held and was supported that year by Bidvest and Southern Sun in association with SABC3, with Southern Sun providing meals and 200 rooms in 26 hotels around the country. The Tour was arranged by the South African Chefs Association (SA Chefs) and the Academy of Chefs, under the auspices of the World Association of Chefs Societies (WACS).The Tour’s patron was Dr Bill Gallagher, founder of the original event in 1993, and its convenor was Martin Kobald, former SA Chefs president.

With donations ranging from R10 from the public for a chef’s hat or song download to over R5 million from Bidvest, the Tour was a resounding success and made culinary history as the biggest-ever fundraising initiative in the global chefs fraternity. Never before have so many chefs collaborated for the single-minded purpose of helping those less fortunate in a place so far from their homes, paying their own airfare and taking leave from their jobs to come and work to raise funds for children they will never meet. Over those 10 days, chefs from every corner of the globe could be seen demonstrating in shopping centres and food from every part of the world tasted in Southern Sun hotels across the country. Swiss, Welsh, Danish, American, Portuguese, Romanian – in fact almost every country you could think of were among the cuisines that ordinary South Africans would otherwise never have tasted – and all without leaving our shores.

“The past 12 days have created many friendships, opened up the minds and hearts of many chefs from many countries; this resulting in a combined effort to help fight the scourge of hunger and malnutrition. The chefs who came to South Africa from around the world will never be the same again; meeting the children of Soweto, Alexandra, Diepsloot to name but a few will certainly leave a special place in their hearts. They came to create awareness for the charities, raise as much funds as possible, share friendship and knowledge – their mission was certainly accomplished!”

“The R8 million that was raised during the Tour was used to provide our selected beneficiaries with monthly food donations, which was provided through the Bidvest group of companies to ensure that we can fulfil our objective of feeding hungry children over a sustained period of time. We would like to thank everyone – from the chefs, to our sponsors to the hundreds of South Africans who dug deep into their pockets to help those in need. The generosity of spirit that we had seen over those 10 days is truly humbling,” said Martin Kobald, Convenor of the Bidvest World Chefs Tour Against Hunger.

Proceeds raised during the Tour were donated to the:

As well as various other nominated regional charities, including:

Said Graham Wood, MD of Southern Sun Hotels, “As one of Africa’s leading hotel groups, Southern Sun strives to remain a leader in sustainable tourism.  The initiative matches our objective of working to make a difference in the lives of South Africans in need and we believe that we have certainly made and will continue to make a difference in the children’s lives. We at Southern Sun have enjoyed every moment of the world chefs tour from the food festivals to the gala dinners. A special thank you goes to you the media and all South Africans for embracing this initiative.” says Graham Wood, Managing Director of Southern Sun Hotels.”

Brian Joffe, chief executive of the Bidvest group of companies, said, “Bidvest believes that education is the first step to nation building. Hungry children cannot learn or become active and productive members of their communities. The Bidvest World Chefs Tour Against Hunger has not only raised money to feed hungry children, but also created awareness of the plight of these hungry children. Ultimately this awareness will change their future.”

The following year in 2012 another WCTAH Gala Dinner took place in September which raised over R170,000 for charity!

Members of the public who want to contribute to the Tour can do so by downloading Sing Children Sing, the heart wrenching song recorded by PJ Powers for the first Tour in 1993 and re-recorded for this year’s Tour. It costs just R10 – which feeds one child for one day – and can be downloaded to your cell phone by SMSing ‘child’ to 31755.
For more information on the Tour and its beneficiaries, log on to www.worldchefstour.co.za.